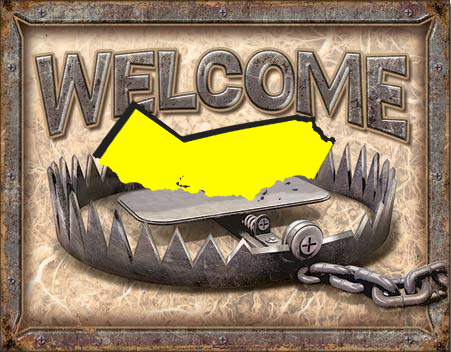 Most of the world knows the Palm Springs area for its picturesque golf courses, celebrity homes and halcyon weather. Among the taxing authorities in Sacramento, however, the words “Palm Springs” conjure up less carefree images. Spurred by the state’s appetite for tax revenues, the Franchise Tax Board, California’s main tax enforcement agency, has tapped into a new revenue source: taxing seasonal visitors to popular vacation spots in California, where residents often have second home. Palm Springs is one such area. But so is Santa Barbara, Sonoma County, San Diego.

This is how it works. California taxes residents based on their worldwide income, from whatever source, no matter how far-flung. In contrast, California taxes nonresidents only on their income derived from California sources. For instance, these might include a limited partnership operating in California or rent from an investment property. Since California has the highest income tax rate in the country, visitors who suddenly find themselves defined as “residents” may face a large and unexpected tax liability.

Obviously, the FTB  would like to claim everybody who sets foot on California soil as a resident and subject their income to California tax. That’s their job, after all. As many seasonal visitors have discovered, the FTB’s policies sometimes seem not to fall too far short of that mark.

A special division of the FTB has for years systematically targeted seasonal “part-time” residents for audit (I use the term “part-time” loosely, since we are talking about nonresidents who spend part of the year here, not part-time legal residents per se; but the term has stuck). Though other vacation spots experience their share of audits, historically the most common casualties are affluent “snowbirds” who own vacation homes in the Palm Springs area as an escape from the winter blasts of the Midwest or northern states. In fact, many of the major cases in residency taxation are eerily similar: they usually involve Midwesterners who own winter vacation homes in Palm Springs and environs. If the FTB finds significant taxable income coupled with meaningful contacts with California (such as a vacation home, business interests or long visits to the state), it can lead to the launch of a full-blown residency audit.

In some ways, these audits are the equivalent of the old-fashioned speed trap, with the difference that a speed trap usually nets the state about $500, while these residency audits can often fill the state’s coffers with tens of thousands of dollars in back taxes. And for the taxpayer this may also mean years of legal wrangling.

Case in point: Gilbert Hyatt, inventor of microchip technology that ultimately resulted in the modern consumer computer industry, found himself audited in 1993 on the issue of whether he was a resident of California or Nevada – states where he owned homes – for a tax year when his invention earned him about $90 million.  Hyatt won (mostly). But the case took over 25 years to resolve.  See the Appeal of Gilbert P. Hyatt hearing summary for all the gory details.

Unfortunately for many nonresidents, “residency” is a legal term of art, one that may have nothing to do with a person’s honest belief that his or her real home lies outside California

A resident audit isn’t like a typical tax audit (see California Residency Audits: Three Year-End Tasks To Reduce Risk for Nonresidents for a discussion of the distinctions). If a large enough tax liability is at stake, to establish legal residency, FTB auditors may appear out of nowhere to interview neighbors. They can subpoena a taxpayer’s utility bills, credit card statements and check register. They solicit affidavits from friends (and enemies).  In general, they pry into a taxpayer’s private affairs.

Unfortunately for many nonresidents, “residency” is a legal term of art, one that may have nothing to do with a person’s honest belief that his or her real home lies outside California. As a result, the outcome of a residency audit often turns on seemingly trivial facts with no legal significance for a non-lawyer.

For example, our firm handled a case in which the FTB auditor concluded that a Texas woman was a California resident despite the fact that all of her significant business, social and family ties were in Texas and her California contacts were limited to a second home in the desert and a country club membership. One of the factors in the auditor’s decision focused on the fact that the woman put her local subscription to The Los Angeles Times on hold when she left the state and returned to Texas. The Times, it so happens, calls that a “vacation hold.” There were other bad facts, but in the auditor’s mind, vacation holds loomed large. It meant that my client’s Texas trips must be vacations, which made California her permanent home. Thankfully, we won the case on appeal.

Under California law, a person who visits the state for other than a temporary or transitory purpose is a legal resident, subject to California taxation. Basically, brief vacations or transactions, such as signing a contract or giving a speech, constitute temporary or transitory purposes that do not confer residency. Every other kind of visit can result in residency status, including coming to California for an indefinite stay for health reasons, extended stays (usually over six months), retirement, or employment that requires a long or indefinite period to accomplish.

How does the FTB determine whether a visit has a permanent purpose versus a temporary one? It applies the so-called “Closest Connection Test.” This refers the comparing contacts a person has with various states during a taxable year: the one with the “closest contacts” is the state of legal residence. For the FTB, this literally means counting all the California contacts a person has and comparing that number with the non-California contacts. Of course, some contacts simply weigh more than others. A job or real estate ownership obviously indicates a closer tie than merely enjoying a round of golf at a country club or attending a music festival. The weightiest factors for residency (based on statutes, regulations and audit practices) are the following:

I hasten to add, these are just factors. Despite many internet myths about California residency, no one thing makes you a resident; and no one thing makes you a nonresident. California doesn’t follow bright-line rules to determine residency, but rather employs a “facts and circumstances” standard. That means FTB auditors can be somewhat impressionistic in their application of the law and downplay the main factors in favor of quirky logic, as our Texas client discovered. In another case our firm handled, the FTB argued that an elderly South Dakota couple with a second home in California were residents because during their seasonal stays here, they would fly overseas or go on a cruise. According to the auditor, if the couple left California to go on a vacation, they could not be on vacation while in California. Again, the FTB eventually lost. There are actual rules about how the tax authorities can weigh contacts. But the rules often only come into play at the appellate level, where attorneys get involved, after a residency audit has occurred and the taxpayers already incurred tens of thousands of dollars in legal and accounting fees.

Warning Signs of a Residency Audit

Here are ten warning signs of a possible FTB audit to keep in mind and to avoid, if possible:

The key to winning a residency audit is to avoid one in the first place. If any red flags are fluttering over your California vacation paradise, you may want to minimize your exposure by carefully examining the rules of residency and applying them to your situation.

[This article is updated from a piece I wrote over five years ago, which has had hundreds of thousands of hits, many of them, I presume, from FTB agents]